A Day Trip to Vancouver Island.

While in Canada during July/August this year I was eager to go on an excursion to Vancouver Island to visit historic Victoria, the state capital of British Columbia.

Time was running out, so my friends and I decided on a day trip to the island. The ferry took us from Tsawwassen Terminal on the mainland side through the Strait of Georgia to Swartz Bay terminal on the island side.

A short coach trip later and we were strolling the streets of downtown Victoria, admiring, among other heritage buildings, Parliament House and the Empress Hotel.


A second bus trip took us on to the famous Butchart Gardens.

Posted by Barbara Oehring Photography at 10:58 AM No comments:

The Koorie Heritage Trust celebrated its 30th birthday on Saturday 19 September 2015 with a free public concert in Melbourne's Federation Square.

I arrived early while the first visitors took their seats in provided deck chairs.

The Koorie Heritage Trust is one of the oldest community owned Aboriginal arts and cultural centres in Australia. It recently relocated from King Street to vibrant Federation Square.


I entered the Yarra Building and stepped into the retail shop where authentic South East Aboriginal designed and crafted products are for sale.


In the gallery next to the Koorie Shop I photographed a 2009 bronze statue of Lionel Rose by Stephen Glassborow; a kangaroo skin art work by Mandy Nicholson: Map of Port Philip Bay, c. 2000; and a recent art work of kangaroo skins by Mitch Mahoney Boon: Yan Yan Gorrinj Bunj Koolin (Growing up), 2015.

By then it was time to stroll towards the Federation Square stage where the show was about to begin.

The concert was hosted by Kamahi King's female alter ego Constantina Bush who entertained the crowd with her black humour and some songs.


The team Indigenous Hip Hop Projects wore colourful tops. The audience was encouraged to repeat the powerful words on the reverse side of the shirts.

After an energetic show Indigenous Hip Hop Projects invited the crowd to dance.

I am delighted to announce that my latest Stop Time: Ferntree Gully series will show at the Ramp Gallery of Monash Gallery of Art from 25 September 2015. 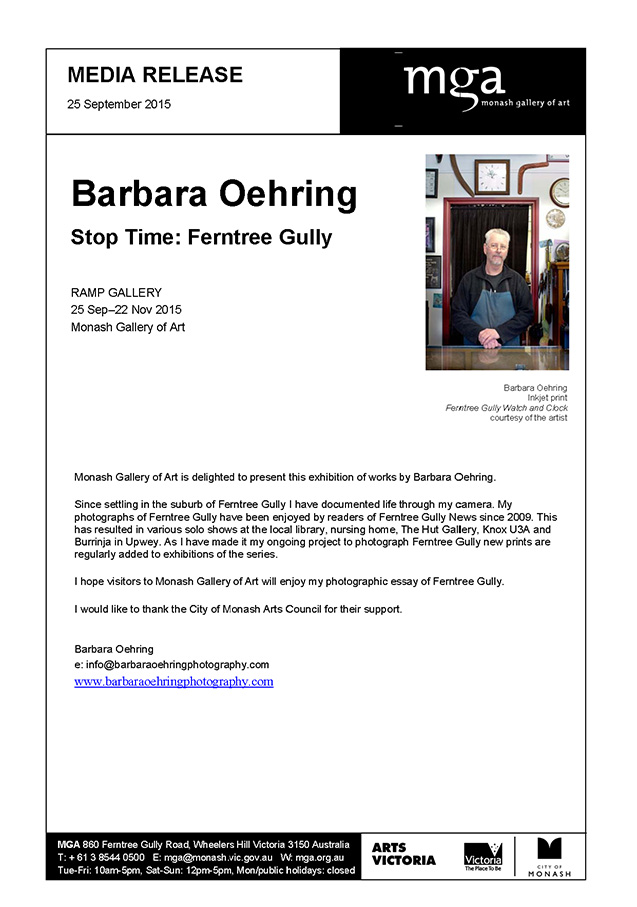 Posted by Barbara Oehring Photography at 5:39 PM No comments:

On a sunny Saturday afternoon in May I attended an artist talk by Bindi Cole.

The Art Gallery is situated in Maroondah Federation Estate where I took this photograph.


The title for the exhibition CHRYSALIS suggests the idea of a protective coating, a sheltered state, or a stage of being and growth.

Bindi Cole in front of Clouds Are The Dust Of His Feet #4, one of a series of large cloud photographs in Gallery One.

Work EH4542 refers to the artist's experiences in prison. Between 1999-2000, Cole spent two years across different prisons in England including the notorious Holloway Prison. For the artist it was a period of significant self-transformation during which she embraced Christianity.

The prison cell plays upon the idea of solitude as potentially nourishing or oppressive. It was built to specifications in accordance with the average size of a prison cell in the British Isles. It features a collection of objects from the artist's time in prison including photographs, identity tags, cigarette papers, lighters, video stills and diary.

In Gallery One the imagery of the prison cell is contrasted with the series of cloud photographs.

The artist's installation We All Need Forgiveness in Gallery Two is an HD video installation lasting 5 minutes.

Kevin Rudd's 2008 "Sorry" speech forms a starting point for much of Cole's work on the topic of forgiveness.


Visitors to the gallery are invited to write their own message of forgiveness on a small cloud; in this way adding to the fabric of the installation.

Here Bindi Cole is photographed with some of her friends who participated in the multi-channel video work while a couple of visitors are inspecting the various messages of forgiveness on the small clouds attached to the wall.


Kutcha Edwards demonstrates the meaning of Reconciliation to the visiting school students.


After the opening celebrations I witnessed a group of children showing much interest in Bindi Cole's video work We All Need Forgiveness. This black and white image is my impression of the original colour installation by the artist.

Posted by Barbara Oehring Photography at 12:52 PM No comments:

A Visit to Heide Museum of Modern Art

On a blustery autumn day I visited Heide Museum of Modern Art in Bulleen to view their current exhibitions:

Rosemary Laing's Photographic Series The Paper in association with ART+CLIMATE=CHANGE 2015.
﻿﻿﻿﻿﻿

Albert Tucker: The Truth in Masquerade.


Kathy Temin's room-sized installation Indoor Monument: Hard Dis-play is one of over 1500 acquisitions by Heide since the turn of the century.

View from a window onto Anthony Caro's sculpture Sidestep.


I went for a walk in the sculpture park before the rain arrived.


A magnificent gum in the gardens of Heide.


Half Moon Shine by Simryn Gill.

I ended a very pleasant afternoon with coffee at Café Vue at Heide.

Posted by Barbara Oehring Photography at 2:35 PM No comments: