In a Victoria exclusive the aerial photography exhibition KATI THANDA by Peter Elfes can be seen at Burrinja Gallery in Upwey from 18 May - 11 August 2013.

This is the first exhibition of the artist's complete works KATI THANDA. It chronicles his five year journey to the heart of the desert: Kati Thanda-Lake Eyre and surrounding deserts.

Peter's low level aerial images capture the beauty and remoteness of this environmentally and culturally significant part of Australia.

On 22 May 2012 the Arabunna people were awarded native title to 62,000 square kilometres of South Australia including Kati Thanda which up until December 2012 had been known as Lake Eyre, named after Edward John Eyre, who was the first European to discover this inland sea in 1840.

﻿
Some of the guests including the artist's wife Kelly Levy far right.
﻿﻿

I revisited the exhibition the next day and enjoyed a guided tour by Peter Elfes.

﻿
The artist with two very appreciative members of the Knox Photographic Society.

Report on 'A Year in Ferntree Gully'

On 15 May 2013 I attended the Mountain District Learning Centre's AGM.

I was pleased to see the report by Anne Boyd, Project Co-ordinator of A YEAR IN FERNTREE GULLY in the MDLC 39th Annual Report 2012. 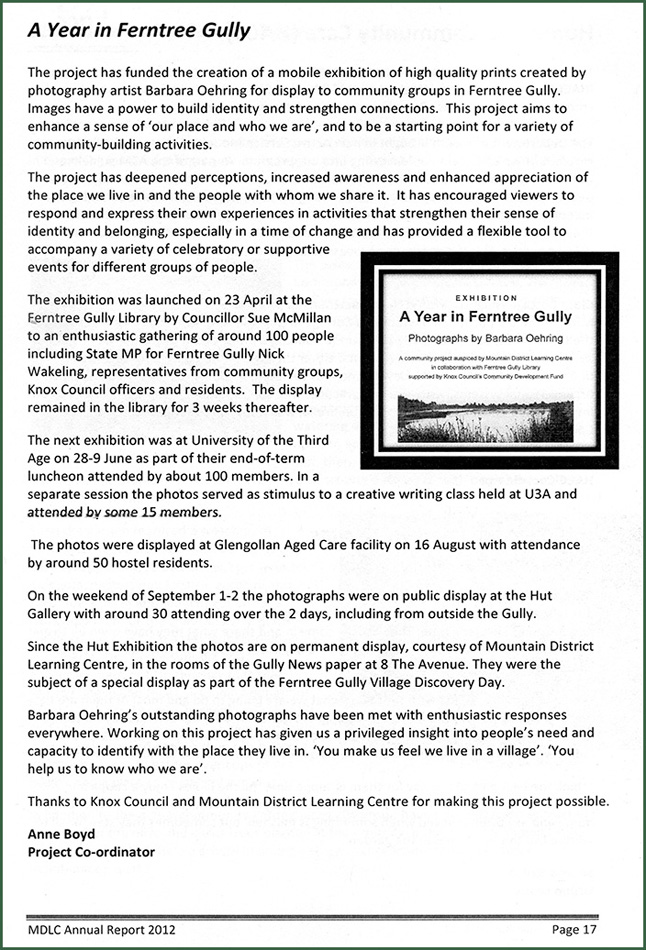 I would like to thank Anne Boyd in particular, the Mountain District Learning Centre, Knox City Council and everyone involved in this wonderful project.


Posted by Barbara Oehring Photography at 8:58 PM No comments:

At the opening of "Tension", the Open Studios Exhibition at Burrinja earlier in the month, Joni's Nuno felt wrap caught my attention.


I looked forward to visiting the artist's studio. Joni works in felt. She says Nuno felt is ideal for the temperate Australian climate. Colours that reflect the Australian landscape inspire her. Joni sources natural dyes from her own backyard.


Joni demonstrates the art of felt-making


The visitors to the open studio showed much interest

Posted by Barbara Oehring Photography at 10:24 AM 2 comments: