The WILIN CELEBRATE 2016 Exhibition curated by Tiriki Onus runs from 10 to 26 November 2016 at MAGNET Galleries Melbourne.

For over ten years Aboriginal and Torres Strait Islander students have come to the Victorian College of the Arts in Melbourne to study at the Wilin Centre for Indigenous Arts and Cultural Development.

Richard J. Frankland, Head of the Wilin Centre for Indigenous Arts and Cultural Development, opened the exhibition on Thursday 10 November 2016.

Well known Yorta Yorta bass baritone Tiriki Onus is a Lecturer in Indigenous Arts and Culture at the Wilin Centre. Here he is with his own exhibition piece 'Biganga' Batja wata, gaiyimarr mawo
(Brushtail possum skins and Kangaroo sinew).

Khi-Lee Thorpe is a descendant of the Worimi people of Port Stephens NSW. Her series 'Home 1' and 'Home 2' are mixed media works on wooden doors.

Ngardarb Francine Riches has two art works in the exhibition. Emu Dreaming 'Gunangunnja', a print made from her original painting and 'Sting Rays in Shallow Water' Acrylic on canvas.

Ngardarb is the artist's Aboriginal name. She is a descendant of the Bardi/Jawi and Karajarri people from the West Kimberley coast.


Other artists represented in the show are Richard J. Frankland with his powerful Bunjil's prayer', 'Singing to the world' and 'New Age Warrior', Vinyl lettering,

Steaphan Paton with Acrylic on wool (found tapestry) work 'Described by the British',
Courtesy the artist and Tristian Koenig Gallery,


Meleesha is a film maker. Her documentary Wilin Warriors will be launched on Thursday 24 November 2016 at Magnet Galleries.
For details please go to http://magnet.org.au/eventcalendar/2016/11/24/wilin-warriors-launch


Posted by Barbara Oehring Photography at 10:36 PM No comments:

I am proud to be involved with my local community paper Ferntree Gully News.

At the Community Newspaper Association of Victoria (CNAV) 2016 Awards the paper received the following awards:

Ferntree Gully News
This entry stood out for its powerful, front-page close-up photo of a kookaburra – an arresting image by Barbara Oehring which beautifully distils the edition’s focus on appropriate development in Ferntree Gully. Quality photos were a feature generally of this newspaper, combined with readable, informative articles, news and events that residents would seek out, e.g. Scouts, Victoria Day celebrations, CFA fire advice, schools and church news. Articles were highly readable and well edited. Page designs, too, were attractive with judicious use of white space, appealing page straplines and good use of the excellent photographs. This is a community newspaper that clearly cares about its readership. And its readership also cares about the newspaper, being well-supported by local business advertisements and contributors.

Ferntree Gully News
‘Don’t Laugh!  This is Serious!’ – Photographer: Barbara Oehring
Carefully timed to capture the kookaburra’s amused expression, well lit, and with a narrow depth of field to remove distracting detail, this is an eye catching and well executed nature photograph.  In immediately grabbing your attention and directing you to the story – in this case about how council is dealing with a threat to habitat – it does exactly what a good newspaper photograph should do.

Ferntree Gully News is published by the Mountain District Learning Centre, 13-15 The Avenue, Ferntree Gully 3156 in collaboration with the Lower Gully Traders Inc.

The paper can be accessed online: ferntreegullynews.com

Posted by Barbara Oehring Photography at 3:23 PM No comments:

On Victoria Day 1 July I was honoured with a 'VICTORIA DAY AWARD Ferntree Gully Electorate 2016'.

I was nominated by Ferntree Gully News. The citation read:

"Barbara Oehring is an internationally awarded photographer who lives in Ferntree Gully.
In 2009, when the community newspaper, Ferntree Gully News began publication, Barbara presented herself as a volunteer, offering to take photographs.

Since then her photos have appeared in every issue, greatly enhancing the liveliness and design of the paper.

Covering events for a newspaper is no small job. From a 6 am Dawn watch to a night-time CFA torchlight procession, in venues all across the Gully, Barbara has been there.

She has photographed people and places, birds and animals, portraits and crowd scenes, sports action shots, news pics and the beautiful landscapes of the Gully.

Photographing for Gully News is not her only volunteer work. Barbara has also made a specialty of photographing the events and artworks of local Indigenous Groups in Knox, regularly attending Sorry Day, Reconciliation Week and other ceremonies.

Barbara is a worthy recipient of a Victoria Day Award and Ferntree Gully News is proud to nominate her."

Posted by Barbara Oehring Photography at 9:54 PM No comments:

I am pleased to take part in STARS: A Photographers' Benefit at MAGNET GALLERIES MELBOURNE. 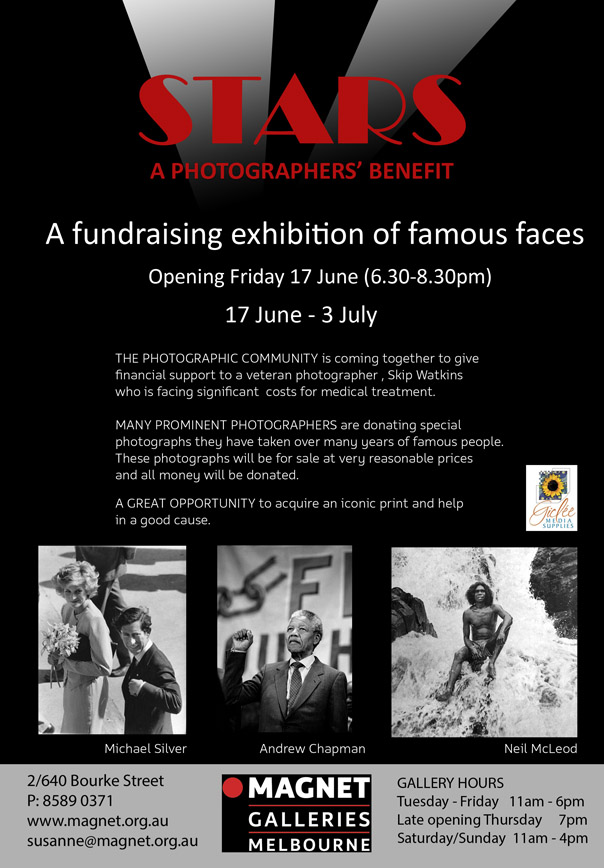 I have donated a print of my photograph 'Barry Jones AC: a national icon'.


Posted by Barbara Oehring Photography at 7:51 PM No comments:

PANORAMA at Tarrawarra Museum of Art

PANORAMA is an exhibition curated by Anthony Fitzpatrick and Victoria Lynn at Tarrawarra Museum of Art in Victoria's Yarra Valley. Selected landscape works from the museum's collection are staged in two parts.

It's always a pleasure to visit Tarrawarra Museum of Art in its delightful landscape.

On 7 May 2016 I attended the public forum Points of View when Part One of the exhibition was on show.


After the forum I captured Danie Mellor (middle) in conversation.


Born of Indigenous and European cultural heritage Danie Mellor's works are linked to cultural histories and concepts of the landscape. On the left a fragment of his painting Bayi Minyjirral in his signature blue and white palette.


I returned for Part Two of PANORAMA on 20 May 2016 to view paintings by Peter Booth, Fred Williams, Brett Whiteley, Rosalie Gascoigne and others.

Work on left by Andrew Browne: Light through foliage 2001, oil on canvas.
Work on right by William Delafield Cook: Promontory 1981, acrylic on canvas.


The landscape is also featured in Judy Watson: the scarifier. I am pleased that this installation is on for the entire length of PANORAMA.

Indigenous artist Judy Watson was invited to create a new installation in response to the site and history of the Coranderrk Aboriginal Station near Healesville (1863-1924).

I was delighted to meet Judy at Tarrawarra Museum of Art.

The artist and the curator Victoria Lynn who is also the Director of TWMA.

As Watson's work is in response to the landscape around Tarrawarra it is appropriately installed in the room with a view.

The artist states:
The scarifier follows the plough. It evokes images of cutting into the ground and the body, leaving wounds, mark-making as it traces the contours of country and blood. Words and actions imprint deeply within the psyche. Descendants carry the scars and memories of their ancestor's stories.

For details go to: Tarrawarra Museum of Art


Posted by Barbara Oehring Photography at 11:35 AM No comments: 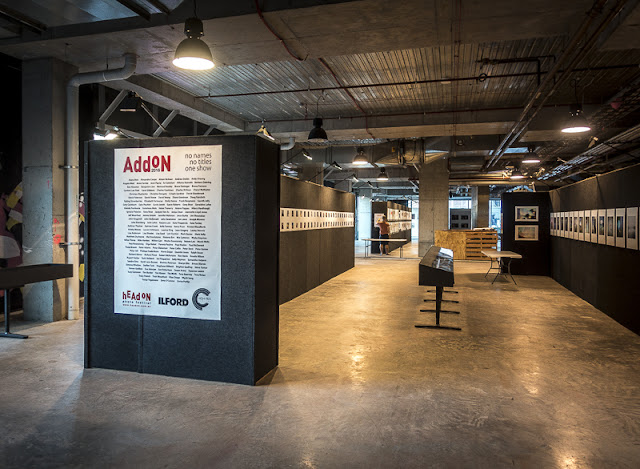 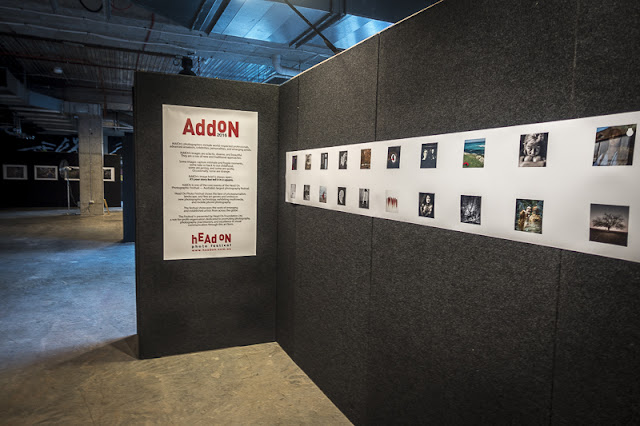 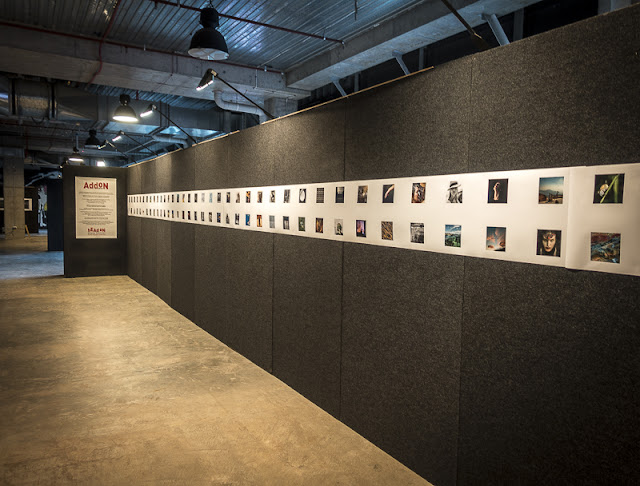 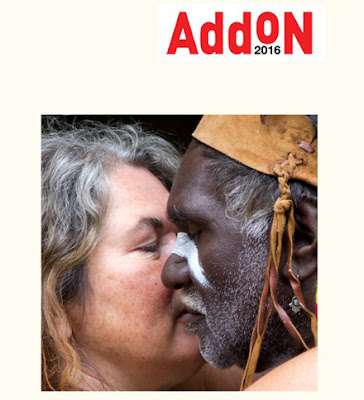 AddOn has closed but Head On continues until 29 May 2016.
For details go to headon.com.au

Posted by Barbara Oehring Photography at 2:31 PM No comments:

I'm delighted to be taking part in this Photo Festival.

One of the core events of Head On Photo Festival, AddOn showcases a diverse and exciting range of square images, taken by more than 100 photographers spanning professionals, artists, enthusiasts, celebrities and politicians. Shown without title or photographer credits, viewers interpret their images for what they are and bring their own meanings to them.

CORANDERRK: WE WILL SHOW THE COUNTRY

CORANDERRK: WE WILL SHOW THE COUNTRY  by writer/historian Giordano Nanni and Yorta Yorta playwright Andrea James, and directed by Rachael Maza, was first presented at La Mama Courthouse in Melbourne in 2010.

On 21 February 2016 La Mama Theatre staged a special one-off performance of CORANDERRK: WE WILL SHOW THE COUNTRY on-country at Coranderrk.

The script of CORANDERRK: WE WILL SHOW THE COUNTRY consists entirely of extracts from the Minutes of Evidence of the Coranderrk Parliamentary Inquiry into the Aboriginal Reserve at Coranderrk. Through the medium of verbatim theatre the cast re-enact key passages from testimonies, letters and petitions of 20 witnesses (nine of them Aboriginal) who gave evidence at the Parliamentary Inquiry.


The stage is all set up.

At 5.00pm the gates at Coranderrk opened and people started to arrive for the 6.30pm performance.


Mission Australia social enterprise restaurant Charcoal Lane provided food featuring native Australian ingredients. A delicious tasting plate was given to anyone with a ticket to the show.

A large crowd, including some descendants of the Aboriginal people who gave evidence at the Parliamentary Inquiry, turned up.


Baby Robert, a descendant of Robert Wandon, with his mother.
Wandon was a Coranderrk stockman, Barak's nephew and successor as Ngurungatea (leader).

Alan Wandin in the presence of his daughters Jacqui Wandin and Brooke Collins welcomed everyone.


CORANDERRK: WE WILL SHOW THE COUNTRY begins.


It was a moving event particularly for the descendants of The Coranderrk Aboriginal Station.
After the performance a Question and Answer session was held. Here a descendant speaks.


For information on Coranderrk's past, present and future, please visit the Coranderrk website:  coranderrk.com
Posted by Barbara Oehring Photography at 5:33 PM No comments:

On Friday night I attended Blak Gala: Stories Behind the Songs, a festival event presented by the Wheeler Centre and held at Shebeen in Manchester Lane in Melbourne. Aboriginal musicians Monica Weightman, Kutcha Edwards and James Henry performed and talked about the stories behind their songs. Actor/writer Tammy Anderson was MC.

Posted by Barbara Oehring Photography at 5:27 PM No comments:

The eleventh Indigenous music and cultural festival YALUKIT WILUM NGARGEE was held on 6 February 2016 at O'Donnell Gardens in St Kilda. The celebration is part of the St Kilda Festival. The main event, FESTIVAL SUNDAY, will be held on Sunday 14 February on the St Kilda foreshore.

I arrived after the Welcome to Country by Arweet Carolyn Briggs, a senior Boon Wurrung spokesperson. Boon Wurrung is a clan of the greater Kulin nations. Euro Yuroke, more commonly known as St Kilda, is on the land of the Boon Wurrung people.

Embracing smoke at a Smoking Ceremony.

Yalukit Wilum Ngargee was hosted by the wonderful actor/writer Tammy Anderson.
Tammy watches the Hip Hop crew from the stage.


Birds of Prey were on show at Yalukit Wilum Ngargee.
Barn Owl and Masked Owl.


Wedge-tailed Eagle.
The eagle is the Kulin nations' spiritual being.


On the stage Monica Weightman gave a great performance.


There were many more musical acts to follow finishing with Bart Willoughby in the evening but it was time for me to leave.


I am looking forward to another Yalukit event: CONFINED. The exhibition by Indigenous artists currently in or recently released from custody in Victoria will be shown at the Gallery, St Kilda Town Hall, from 10 February to 8 March 2016.

Posted by Barbara Oehring Photography at 11:45 PM No comments: