I am very pleased to announce my next photographic exhibition Stop Time: Ferntree Gully.

some favourites from my 2012 community project exhibition A Year in Ferntree Gully.

Framed prints from this series will be available to purchase for the first time.

and images not shown before

Website: http://www.burrinja.org.au/
This e-mail address is being protected from spambots. You need JavaScript enabled to view it.
Café Phone: 9754 5707


Posted by Barbara Oehring Photography at 12:23 AM No comments:

The Commemoration of the William Cooper Walk in Melbourne on 6 December 2012 was followed by Meet Barbara Miller, the author of "William Cooper: Gentle Warrior, Standing Up for Australian Aborigines and Persecuted Jews".

Meet the Author and Book Signing took place at 425 Collins Street, a 1930's heritage listed building next to where 74 years ago the Aboriginal activist William Cooper and members of the Australian Aborigines League tried to hand a letter to the German Consul-General to protest against the Nazis' treatment of the Jews.
﻿﻿﻿﻿


Barbara Miller was inspired by William Cooper's story to write the recently published book. She tells us that the book is primarily about William Cooper but also a little about her as a white woman married into an Aboriginal family.
﻿﻿﻿﻿﻿﻿


The grandson of William Cooper, Alf Turner (Uncle Boydie) who led the re-enactment walk has written a Foreword to Barbara Miller's book. He was present at the book signing.

﻿﻿
A member of the Aboriginal community from the Northern Territory at the book signing. ﻿
﻿


Posted by Barbara Oehring Photography at 12:01 AM No comments:


William Cooper (1860-1941) was an Australian Aboriginal activist of Yorta Yorta decent. He was also a man who stood up for persecuted Jews.

On 6 December 1938 William Cooper and members of the Australian Aborigines League walked from his Footscray home to the German Consulate in Collins Street, Melbourne. They tried to present a resolution condemning the treatment of Jews on Kristallnacht but were refused.

I was fortunate to witness a re-enactment of this walk on 6 December 2012. It was led by William Cooper's grandson Alf (Uncle Boydie) Turner.

The building 223 William St (on the corner of Lonsdale St) is named after William Cooper. It is part of Melbourne's legal precinct.

Alf (Uncle Boydie) Turner then led the party on the walk to Collins Street for a re-enactment of the handover to Germany's Honorary Consul-General in Melbourne, Michael Pearce SC.

﻿  ﻿﻿﻿ The German Embassy fully supported the commemoration, Michael Pearce said. "I feel it's been an opportunity to right a wrong from the past".﻿﻿﻿﻿

Posted by Barbara Oehring Photography at 3:25 PM No comments:

On a hot spring evening I stopped at Lilydale Lake Wetland for a short bird walk.


I was delighted to discover a Buff-banded Rail

and very surprised to find a Pink-eared Duck - a single bird (drake) on a post with a nesting box.

Next was a Great Cormorant,
﻿﻿﻿


and at the end of my walk I saw a pair of Purple Swamphen bathing.
﻿
﻿﻿

Posted by Barbara Oehring Photography at 12:23 AM 2 comments:

I was honoured to be a guest at a reception hosted by Mrs Elizabeth Chernov in the presence of Her Royal Highness The Duchess of Cornwall on 7 November 2012. 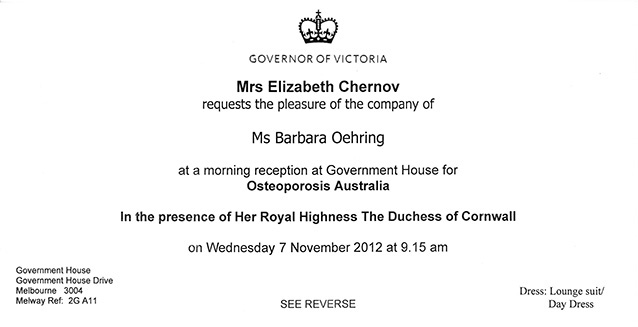 Camilla, wife of Prince Charles, is President of the National Osteoporosis Society (UK). Her Royal Highness told the gathering she was determined to hold an osteoporosis reception during her tour of Australia.The issue of osteoporosis was very dear to her heart as both her mother and grandmother were sufferers.

The event was attended by leading Australian bone experts, researchers, patient groups, society and corporate identities as well as representatives of Osteoporosis Australia.

I was one of two representing the South East Melbourne Osteoporosis Support Group of which I was a founding member.

Maxine McKew, former politician and journalist, has served as patron of Osteoporosis Australia.

Posted by Barbara Oehring Photography at 10:38 PM No comments:

AROUND THE SHEDS - Book Launch

ANDREW CHAPMAN'S Around the Sheds, a photographic record of life in and around the woolsheds, was launched today by Alan Attwood. Alan has also written the foreword 'A labour of love - and light'.

Around the Sheds is a follow-up to Andrew's best-selling Woolsheds.

It was the last day of the photographer's long running exhibition Nearly a Retrospective at Burrinja.

A large crowd of around 200 people gathered for the book launch in the gallery.

The Five Mile Press, publishers of AROUND THE SHEDS and WOOLSHEDS were represented at the launch by Juliet, Janet and Julia.


﻿
Bruce Ilsley, the young man who on Anzac Day 1977 shook Malcolm Fraser's hand in Andrew Chapman's photograph at the Shrine of Remembrance in Melbourne, attended today's book launch with his wife Glenda. Through a string of coincidences Bruce found out about the photo of him in Andrew's exhibition. He brought along the same jumper he was wearing in the photograph a long time ago.

In my image below Bruce in his jumper and Andrew are recreating the "handshake".

Posted by Barbara Oehring Photography at 7:03 PM No comments:

The Cottage at No. 8 The Avenue, home of the community paper Ferntree Gully News, has also become a gallery. I am delighted that my 'Year in Ferntree Gully' photographs have found a permanent home in the Cottage.


The October Newsletter of the Mountain District Learning Centre (publisher of the Ferntree Gully News) reports:

"Recently we hung high on the walls most of the photographs of Barbara Oehring's beautiful 'Year in FTG' exhibition. As we did so the rooms took on a new dimension. The power of the photos began to make themselves felt. Now our gallery rooms can be a place for delight, reflection, history, all taking inspiration from the pictures on the walls."


Posted by Barbara Oehring Photography at 10:59 PM No comments:

I am pleased to announce that I have won 1st prize in the Open Category of the Wandin - Silvan Field Days 2012 Photographic Competition.

My winning image ASHLEY WITH STRIDER, TAMMY & FELICITY was displayed at Wandin East Hall during the Wandin - Silvan Field Days on 12 and 13 October 2012.

From 16 to 31 October 2012 it will be on view at the Wandin Seville Community Bank.﻿
Posted by Barbara Oehring Photography at 10:35 PM No comments:


﻿
A detail of the 1803 painting by Jacques Louis David 'Napoleon Bonaparte, First Consul, crossing the Alps at St Bernard Pass, 20 May, 1800' graced a wall of the National Gallery of Victoria.

In one of the many exhibition rooms of Napoleon: Revolution to Empire this impressive painting could be enjoyed in full.

A striking display featuring the Bee - traditionally associated with the sovereigns of France - and which Napoleon chose as the symbol of his empire.

﻿﻿An erhu player entertaining the passers-by.
﻿﻿﻿﻿﻿


Posted by Barbara Oehring Photography at 12:46 AM No comments:

SHERBROOKE FOREST is part of the Dandenong Ranges National Park east of Melbourne. It occupies the largest section of the Park.

For over a hundred years the beauty of the area has attracted visitors.

There are many walking tracks leading from picnic grounds in the forest.

I am fascinated by the eucalypts and their varied bark, the tree ferns and the birds.

Posted by Barbara Oehring Photography at 6:19 PM No comments:

Spring in the grounds of the Knox Community Arts Centre.


﻿
﻿﻿
In this adaptation of The Magic Flute the Auslan interpreters were involved as performers on the stage.

Oz Opera's transport of the day.

Posted by Barbara Oehring Photography at 8:23 PM No comments:

This exhibition is held at Burrinja Gallery, Upwey, Victoria.

I recently visited the show with a friend and returned to attend an exhibition tour with the artist and hear stories behind the pictures.

The photographer with his political work.


﻿
Signing his book Woolsheds for the President, Friends of MGA Inc.


Posing in the Burrinja Café


The following events are part of the Andrew Chapman Exhibition Public Program at Burrinja:

Andrew Chapman: Around the Sheds
Sunday 28 October 2012, 11am
Andrew Chapman, author of The Shearers and Woolsheds presents his new book Around the Sheds.
This talk will go for approx. 60 minutes. Places are limited so please book online or call 9754 8723.
Posted by Barbara Oehring Photography at 12:03 AM No comments: