I am pleased to have been invited to participate in the 3rd annual women photographers exhibition to celebrate International Women's Day. 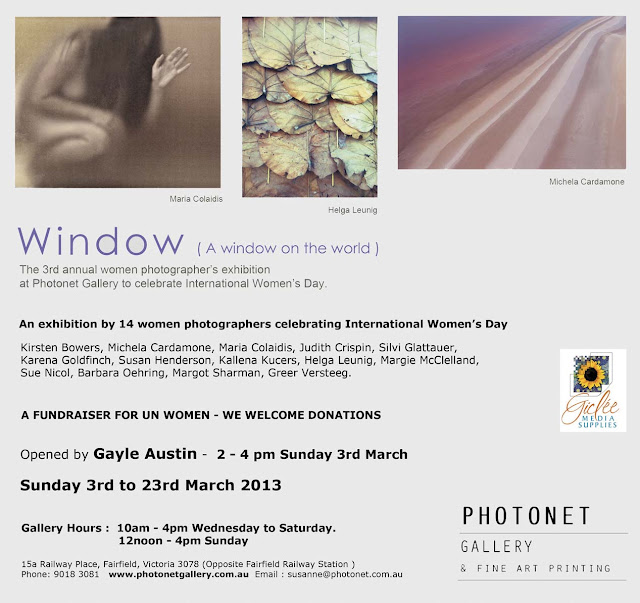 Posted by Barbara Oehring Photography at 12:05 PM No comments:

My photographic exhibition at Burrinja Café Gallery was officially opened by critic Peter Craven on 19 February 2013.

My friends and guests were many and varied. They included Aboriginal activist and painter Shirley Angus; President, Monash Gallery of Art Friends, Godfrey Clay; and singer Judi Connelli AM.

I was honoured to have Laura Smyth MP, Federal member for LaTrobe, attend.

Many thanks to Peter Craven for opening my show, David Martin for his didgeridoo performance, Helena Griffiths for her offer to take photos on the night and my son Colin Oehring for acting as MC.

I thank all my dear friends for attending. You helped make it a very special night.

Website: http://www.burrinja.org.au/
This e-mail address is being protected from spambots. You need JavaScript enabled to view it.
Café Phone: 9754 5707

Posted by Barbara Oehring Photography at 9:40 PM No comments:

A Poetic Tribute to Barry Jones

I was fortunate to be among the guests at A Night of Poetry for Barry Jones.

The Poetic Tribute was a belated 80th birthday treat for this remarkable and much loved man.

The booked out event was held at fortyfivedownstairs, Flinders Lane, Melbourne on Tuesday 12 February 2013.

The Chair of fortyfivedownstairs, Julian Burnside Q.C., curated a night of some of Barry's favourite poetry and music.


Barry Jones studies his poems before the start of the event.


John Stanton opened the poetry reading with Matthew Arnold's "Dover Beach" and ended the night with Cavafy "Waiting for the Barbarians" and "The Windhover" by Gerard Manley Hopkins as an encore.

Barry Jones read Yeats and Wordsworth on the night and his partner Rachel Faggetter also contributed.


﻿
The programme included performances by the Flinders String Quartet.

Biography as per programme notes:
Barry Jones is one of the more remarkable politicians to have sat in the House of Representatives in Canberra, a much loved and respected figure on both sides of politics. Born 11 October 1932, Barry is an Australian polymath: writer, lawyer, social activist and quiz champion. He is the author of Sleepers, Wake! (1982) which ran into 26 impressions and was the Ministr for Science from 1983 to 1990. Barry was the Australian Representative at UNESCO 1991-95 and the World Heritage Committee 1995-96 and is also the only person elected to all four of Australia's learned Academies.
Posted by Barbara Oehring Photography at 11:31 PM No comments:


The sixth annual Belgrave Survival Day was held among the trees in Belgrave's Borthwick Park in the Dandenongs.

I very much enjoyed the experience of attending the previous year's festival and decided not to miss it in 2013.

The atmosphere was again warm and inviting.

We were formally welcomed with a traditional Smoking Ceremony.

Nadhe dances to the music.﻿

My post on the 2012 Belgrave Survival Day Festival:
http://barbaraoehringphotography.blogspot.com.au/2012/02/survival-day-australia-day.html
Posted by Barbara Oehring Photography at 11:45 PM No comments: